The hardest thing about getting older

The hardest thing about getting older isn't the jowls, or the hair loss, or the creaky knees, or the utter stubbornness of the belly fat you really did try not to accumulate, or even the inevitability of our own certain demise, because life here on earth is going to be a dystopian nightmare in about twelve years anyway. No, the hardest thing is watching the losses pile up, as both your cultural touchstones and those around you start going gently into that good night.  Some of them are older, some the same age, and some are younger, which tends to make one wonder why one has been chosen to still be here.

On September 28, the last of the cancer vloggers I was following, Daniel Thomas (a.k.a. Peeweetoms) died after a three-year battle with an aggressive and particularly horrific soft-tissue cancer called pleomorphic sarcomatoid carcinoma.  Dan Thomas was a cheeky fellow, also from the UK, whose journey actually had him cross paths with Emily Hayward, who predeceased him into the embrace of the universe by almost exactly three months. Dan leaves behind a heartbreakingly young widow, part of an amazing and highly entertaining family who plans to keep posting what may be hundreds of hours of Dan's musings on life and never giving up that he recorded in a frenzy in his final months.  This young man faced terminal illness with a bravery that most of us twice his age don't manage, all at an age (32) when so many of his peers are playing beer pong.  I have to admit that Dan's demise didn't knock me flat quite as much as Emily's did, mostly because when  you've seen video of a formerly vital young man, his skin sunken into his skull, his face wracked with pain, still vlogging while on large doses of morphine in a hospice, you just shout to the universe "Just take him already and free him from this pain!"

I think it's also that I was in a flurry of activity lining things up for the consignment of Mr. Brilliant's cremated remains to the waters off of Negril, Jamaica, where in 12 trips to Negril and another six to other parts of the island, he was able for one week to stop fretting about work and his own self-doubt, smoke all the ganja he wanted, and just BE.

I'd always planned to do this, I just wasn't sure when.  When he first died, I just "wanted him home", even if that meant a Japanese-inspired urn on the dresser.  But over the five years since them, the question of what would happen to them if I died started to really bug me, because the truth is that there isn't another human being on the face of the earth who was going to care what happened to him.  And just because he would tell me (when he wasn't quoting Homer Simpson about how he wanted to be stuffed and propped up on the couch as a constant reminder of our marital vows) to just throw them in the garbage, I wasn't going to indulge his more depressive moments by doing that. 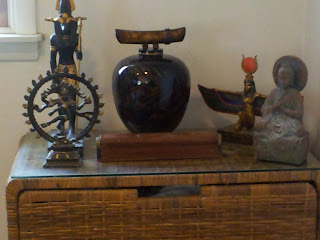 Transporting cremains to Jamaica involves a TSA-approved urn and something called a transit permit.  Since I was planning a water burial, a degradable urn was easy enough to find online.  Most airlines require that cremains be in your hand luggage in order to prevent incidents like this one.  The transit permit, however, is a bit more difficult, because you are required, if you are unlucky enough to have your hand luggage searched, to present it at Customs.  Now, you might be able to find a driver willing to do this legwork for you, but then there's the issue of how to get it to you.  So to make a very long and anxiety-fraught story short, I managed to find in a Facebook group a service charmingly named Any Likkle Ting U Need, and was able to FedEx them the necessary paperwork, whereupon they had to shlep an hour and a half to Montego Bay and make three stops to get the damn thing and FedEx it back to me.

With that taken care of, the next thing to deal with was finding a boat operator who would take us out far enough to place the urn in the water, where it would float for 3-5 minutes, then sink and gradually decompose over a period of days, presumably scattering the cremains among the sands of the Caribbean, where they would lie under the Jamaican sun forever.  I'd wanted him home, but now I wanted him to have this permanent Negril vacation so he wouldn't end up either in a dumpster someday or else shocking someone who buys this beautiful urn at my estate sale.

Facebook has taken a lot of entirely well-deserved flak over the last few months.  But before it became a data-mining, election-influencing monster, it was a social network, that facilitated old friends reuniting after many years, relatives who never see each other to keep in touch, parents to stalk their children, the lonely to find support, and so on.  And just as a Facebook group brought me to the folks who went above and beyond to get me the transit permit that I ended up not needing thanks to Club MoBay, who breezed us through Customs, it brought forth a wonderful American woman who lives part-time in Negril who set us up with a friend who just happens to be a  dive instructor.  Now, all jokes about "Only you could find a Jamaican dive instructor named 'Myron'" aside, Myron and his crew proved to be compassionate gentlemen who treated Mr. B's urn with the appropriate solemnity and respect.  And Myron went above and beyond anything I had expected by diving into the water himself, and tucking the urn under some coral, where it would be not readily visible to curious divers.  Then he told me the exact name of the reef where we did the internment, and pointed out the landmarks, so if I should decide to go to Negril again, I will know where the ashes are. 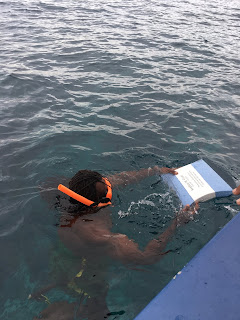 When I told my sister, who had accompanied me on the trip, that both the couple who got the transit permit, and the woman who set us up with the boat, would be on the boat, she asked "Are you sure you want to do this with people you don't know?"  But the answer was "Absolutely," My gut told me at that point that these were EXACTLY the people I wanted with me.  These were the kind of people whom I truly believe that Mr. Brilliant, who hid the self-loathing I'd never known he had until the last months of his life  behind a façade of "No one I didn't meet first is cool enough", would have absolutely found to be "cool enough" for him.

As our plane took off from Montego Bay two days later, I did feel a little bit like I was leaving him behind; abandoning him somehow.  And yes, once I got home the grief journey started all over again and it continues still.  The weather grows chilly here in North Carolina, there has already been snow in New Jersey, and he always hated November.  But every time I visit that Facebook group and someone has posted yet another photo of the beach, or the beautiful sunset, I feel that he's exactly where he'd want to be.  And then I wonder how it can be five years already. 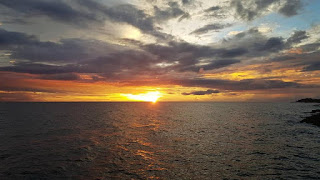