When "the middle" is a Kansas church that uses white nationalist imagery, the hell with it

UPDATE:  Jeep has now pulled the Springsteen Jeep ad because it seems that Mr. Middle was busted for DUI last fall.  Somewhere out there, Irony is laughing her ass off.

The Super Bowl has always been for me nothing but  the first of three new year mileposts on the way to Spring Training, the other two being the Golden Globes and the Oscars. Of course in this Year Two of the coronavirus pandemic, with said virus seeming bound and determined to remove our miserable species from the planet, these Rituals of American Excess just don't have the same energy they usually do.

The latter two of these displays of American Excess, those festivals of  hideous designer clothing and self-congratulation, are likely to be virtual this year, and the thought of movie stars accepting awards from their living rooms while dressed in chihuahua pajamas just points out how these awards shows really ARE just about the clothes. And with most of us having seen few if any of the nominated movies (how do you distinguish a movie from a TV show these days anyway), what's the point of spending three hours on JUST the self-congratulation? I have to admit a morbid fascination with the "In Memoriam" segments, mostly because I'm at an age where the cultural touchstones of my youth are dropping like flies, which just adds to my sense of being Next In Line For Oblivion. But overall, I think I'd be far better served by watching something I missed because my fascination with the Parade of Horrors that the final years of Orange Pinochet have been have had me glued to the news.

The only time I can recall being interested in the Super Bowl, or being at something resembling a Super Bowl party was in 2008, Giants vs. Patriots, when we had friends over and one of them assured me that even though Mr. Brilliant was adamant that he hated turkey meatballs, he'd love HER turkey meatballs, and she was right. It was a great game, actually, with the Giants winning in the last few seconds. Usually the game is such a lugubrious affair, relentlessly hyped for the two weeks beforehand, but inevitably resulting in a boring game played between two teams that nobody really likes outside of their cities, and  a mediocre "Triumph Of The Will"-reminiscent, pyrotechnics-heavy half-time entertainment. Starting in the 2000s, these shows became less about a theme and more about what Major Star (TM) the NFL could get for it. It's been was a time of Major Stars indeed, with the likes of Paul McCartney, The Rolling Stones, and Michael Jackson upping the ante of big names. These days all I know about the halftime performers is their names, other than Bruno Mars in 2014, and that only because Uptown Funk was not only the Earworm of the Year, but because of the many YouTube mashups of classic film dance sequences to it.

Because the game itself is almost always boring, and because the lifecycle of the Huge Pop Star (there are no Huge Rock Stars under age 60 anymore) is so short, the Big Game has become about the commercials. That the Super Bowl is primarily a psuedo-holiday devoted to consumption of artery-clogging processed food in a house full of people or crowded bar made it difficult to market in this pandemic year.  Far too many Americans are simply unable to buy the stuff they used to, or even the wings 'n' nachos; and celebrating barely weeks after a mob exhorted to violence by an on-the-way-out president came uncomfortably close to murdering various members of Congress, but chose as a consolation prize a Capitol police officer, beating him to death with a fire extinguisher, seemed just a tad inappropriate. So even the hype this year seemed kind of half-hearted, and so the ads did too.

And then there was this:

I'm not sure who Jeep was targeting this ad to, other than perhaps Joe Scarborough, who predictably spent the better part of an entire segment on Monday waxing rhapsodic about it.  After all, the white male middle is Scarborough's stock in trade, and as everyone who watches Morning Joe knows, it's exactly the same kind of predominantly white, predominantly suburban, predominantly Christian middle that non-crazy white men long for these days. Jewish liberals like me were made queasy by the relentless Christianist iconography, particularly the shot of the cross over a stars-and-stripes-festooned map of the US, topped with the exhortation "PRAY AMERICA," which someone with a clue should have known is common among white nationalists. And what the hell does THIS image mean? Is it meant to depict the crucifixion? Is the barbed wire a symbol for Trump's wall? Or are these crosses waiting to be lit on fire? 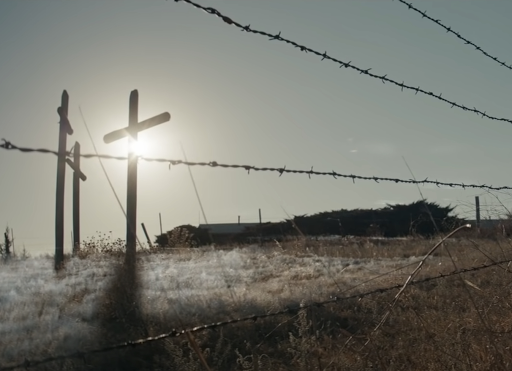 WHAT THE HELL ARE THEY SAYING HERE?

And then the cluelessness is compounded by the craggy, nearly-unrecognizable face of the aged Bruce Springsteen, an outspoken liberal from New Jersey who fancies himself, and indeed has been anointed by some, as the Second Coming of Woody Guthrie. While Guthrie, who died of Huntington's Disease at age 55, didn't live long enough to be come the Craggy Wise Elder, Springsteen has, and  that is the look Springsteen and Jeep are going for here. Springsteen's heart is in the right place, and aside from an unfortunate and mercifully brief foray in the 1980s into the obligatory buff-muscled marry-a-fashion-model phase, he has done a good job of putting his money where his mouth is over the years. So it's hard to believe that even a Michigan-based ad agency was clueless enough to see Springsteen as someone that the people who go to that church in Kansas that's depicted in the ad will see as One of Them. I wonder if Springsteen got to see the ad after it was done, and frankly, I wonder if he realized what it looks like for those not in the targeted demographic.   Because it is an ad that excludes people of color, urban people, women, those who realize that the middle is essentially where  the Democratic establishment is, and anyone other than right-wing Christian males. It is an ad targeted specifically to those very white people who attempted to overturn an election and overthrow our institutions, asking them to buy a vehicle developed for the military, shilled for by a liberal rock star who lives in the New York tri-state area.

It's easy for me to think well, maybe I'm just being paranoid. I've often felt over the last eight years that I am doomed to re-live my mother's life, but until the pandemic forced relentless solitude upon me, with Zoom being only a partial balm, my active social life allowed me to think perhaps I'm not doomed to EXACTLY the same path. But now it seems that I am, and increasingly of late, I seem to be doomed to another of her less-charming traits, and that is seeing anti-Semitism around every corner. But of course, just because you're paranoid doesn't mean they AREN'T out to get you.  Still -- was I overreacting?  Not according to The Wifely Person:

"I really tried to look at this ad from a whole bunch of viewpoints. It didn't matter. The words did not match the images. The images were pretty clearly directed at Christian Whites, the ones who were still donating to Feckless Loser's campaign to overturn the election. Were they targeting that group subliminally to say, It's over; come back to the centrist position of the GOP ? Or were they telling them White Supremacy is the source of light and truth? It's not easy to discern which message is the target message when the images do not match the words.

"These guys spend tons of money on ads. This one is two minutes plus. There is no way you will ever convince me that the ad agency did not know what it was doing, or that Bruce Springsteen thought this was benign. It's inconceivable.

"There is nothing benign or harmless about this ad. Anything Springsteen has to say about it will be coached and probably apologetic, but all bullshit. They knew exactly what they were putting up and they were hoping We, the People would aw, shucks the Boss in his cowboy clothes. They were counting on the emotional impact, but not the one it appears to have punched."

If you're tempted to dismiss her as just another paranoid Jew, there's Phil Woodson, an actual Christian pastor, who saw it too -- and explains in excruciating detail, which I highly recommend you read.
I realize that I've just written a very long screed about a Super Bowl ad when I haven't been able to focus enough to write about the election, the insurrection of January 6, the inauguration of the first person of color and woman as Vice President, the miracle that is Amanda Gorman, or even yesterday's Impeachment Redux. Perhaps it's that these things are just too big for my brain to handle, given that I lost my ability to focus and concentrate one day in March 2013 when I received an email from Mr. Brilliant at work that said "The ultrasounds weren't good. Please call me" -- and it has never really returned. But this relentless focus on a middle that is ONLY about the white and the Christian as being an ideal that means All Is Right With The World is terrifying on a very visceral level to those who don't fit the description. At least this screed deals with something real and immediate.  I COULD have written about that ad which uses Pete Seeger's paean to mill workers to sell Volvos to hipster douchebags who find parenting to be just too hard.