On being a secular Jew in neo-Nazi-ascendant America

My parents split up and both remarried.  My father married a lovely woman who wasn't Jewish and celebrated a mostly secular version of Christmas.  My mother married a Jewish man who went to services on High Holy Days but also ate pork.  Mom's version of being Jewish meant all the baggage of our people and none of the religion.  And to some degree, this is what I inherited.

I was always aware of being Jewish, no matter the Christmas tree, or the years we went to the Unitarian church, and long after the menorah was put away in favor of permanent Christmas at home.  I read Leo Rosten's The Joys of Yiddish. I joined the junior youth group at the synagogue in town despite the fact that we didn't go there.  I went to my friends' bar and bat mitzvahs.   I saw "Fiddler on the Roof" in the movie theatre.

My first experience with anti-Semitism was in high school, when the mother of a friend of mine referred to me, and others of my ilk, as her "dirty Jew friends."  She was shuffled off to a private school, partly to remove her from my terrible influence, and we lost touch after that. (I am happy to report that thanks to social media, we are now friends again and when she visited me briefly a few years ago, it was as if those years had never happened.)  A few years earlier, there had been a bit of a to-do in town because of a requirement that to be in the choir, you had to be in the Christmas tableau.  A few Jewish parents and ACLU-ers filed a lawsuit, and there was some nastiness in town that eventually settled down.

I saw more of it at the provincial tiny college I attended, where once someone literally asked me:  "If you're Jewish how come you drive such an old car?"  I met someone who was perhaps the only other Jew on campus in my sophomore year, and we dated until I graduated.  After graduation, I dated Jewish and non-Jewish guys, then joined a Jewish singles group at the Y.  That was when I came closest to really returning to the fold, even having a seder one year for my mother, her husband, and my ex-nun Catholic downstairs neighbor.  But then the Y decided to eliminate our program because we weren't producing marriages and babies. And that was the end of all chances this world had to make me a practicing Jew.

So what was I?  I married a pagan, celebrated the Winter Solstice because we were obligated to endure a horrific Christmas Eve with his father and brother every year, but I have always identified as Jewish.  But what is that, really?  Someone asked me that recently, and I didn't know what to say.  I've never "tried to pass", for all that I have kept this Italian last name because I've had it for over 32 years and I'm used to it.  Yes, I bake cookies that may or may not fall during Hanukkah, and I've been known to hang a garland on the mantel, because I figure these are all symbols from Celtic and Germanic paganism anyway.

Most years I don't even know when the High Holy Days are.  I eat pork.  When I was a child my mother somehow always ended up making pork chops on Yom Kippur.  She always said she never planned it that way, but I wonder if that was HER passive/aggressive way of separating herself.  And yet, I am still Jewish.

Jewishness is in my soul, in a deep place that I can't even define.  It's in that deep pain that I feel when I see imagery of the Holocaust.  It's in that fear that I feel when I hear about swastikas being spray-painted on synagogues and in public high schools, and when Jews are massacred in their synagogues as happened in Pittsburgh this year.  It's in that fear when I see people in Charlottesville, Virginia shouting "Jews will not replace us", or when a Trumpazoid invokes "George Soros," which I know is code for "Jewy Jew Jew Jew."  It's that knot that my stomach turns into when anyone discusses Israel, because I am not a Zionist, I feel no strong affinity for Israel, I hate what Netanyahu is doing, and yet I feel that the Jewish state is necessary BECAUSE of the people in Charlottesville and BECAUSE of the massacre in Pittsburgh and BECAUSE of the swastikas in the high schools.

It's in the experience of having gone with Mr. B. to see Marc Maron doing stand-up comedy and him finding it funny while I'm practically on the floor laughing until my stomach hurts because I KNOW what it's like to live in a head like that.  It's in the feeling of hearing four bars of klezmer and knowing that it is the song of my people.  It's in the collective memory that the aroma of half-sour pickles and pastrami evokes; one of shopkeepers and tenements and the people who came here on ships in the early part of the 20th century.  It's about the experience of seeing the Statue of Liberty gleaming in the sun as the cruise ship I'm on approaches New York Harbor and knowing in my heart the hope that my grandparents felt when they came here from Russia and Poland to escape the pogroms because as it has always been, Jews were already blamed for everything.

I often wonder about guys like Stephen Miller and Mike Cernovich; guys who were born Jewish but have adopted views that fly in the face of the hardships their forebears endured.  They insist that they are not Jews, as if that will insulate them when shit gets real.  Perhaps it will.  There was the Jüdenrat during the Third Reich after all -- a Jewish agency charged with enacting anti-Jewish policies. But I simply don't understand how someone can NOT have that feeling in their soul of this collective history, its joys and its heartbreaks.

When my mother died in December 2012, my sister found a reel of home movies in her house.  She thought it might be from when we were kids, and took it to be digitized.  But what was revealed was even more important.  It was footage from our mother's childhood, between around 1930 and 1938.  These are fascinating snippets of the Jewish diaspora in America during that time.  Most of them are short clips, but there is a longer video of a party which appears to be a celebration.  My grandmother and three brothers had come to the US together from Poland.  Their parents and sisters came later.  This clip appears to be a celebration of their arrival.  What's striking about this clip is that my grandmother, the most sour woman I ever knew, looks happy.  My mother is perhaps three or four, wearing a little white dress and a big bow in her hair.  She is dancing with another girl and my grandmother is smiling, clapping along and smoothing my mother's hair. It is a joyous gathering. My great-grandparents and their eldest son, Joe, who stayed
in the US along with my grandmother and three brothers. 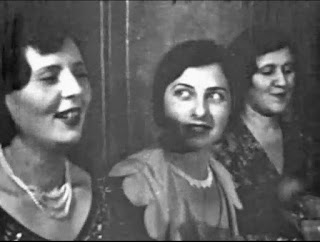 My grandmother's sisters returned
to Poland with their parents. 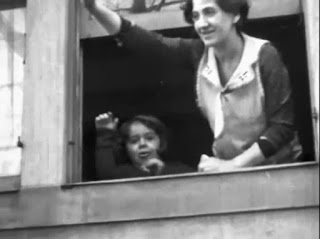 From a different video.  My grandmother here is
waving at her father here, probably upon his arrival.
My mother is sticking her tongue out at the camera.
She did this her whole life, thinking it was still
adorable even in her 80s.

My great-grandparents were unable for some reason unknown to me to adjust to life in the US, so they and the sisters returned to Poland -- just in time for Hitler.

Watching this video, and other clips which show my mother and her sister as normal, happy children, playing in the sand at the beach, riding ponies, kicking water in a kiddie pool, playing hopscotch, it suddenly all made sense.  The monster that my mother had always described her mother as being wasn't always that way.  She became that way when she learned what had happened to the members of her family who went back. I can't even imagine the guilt and recriminations she must have felt -- the "what if"s and the "If only"s -- regrets she lacked the psychological insight to deal with.  We believe she turned her grief and rage against her husband and children.  And those children turned that damage against THEIR children -- in our case, those children being my sister and me.  We too are Holocaust casualties for all that we have no Holocaust survivors in the family that we have known.  Neither my sister nor I have children, and perhaps that's for the best.  It ends with us.

I've never tried to hide that I'm Jewish.  Even when I married Mr. B. and changed my last name because I was tired of being at the end of the alphabet, I've never tried to hide.  How could I hide?  It's in the way I talk, it's in the way I overanalyze everything, it's in my dark sense of humor, it's in the neurosis and anxiety that more clever Jews than I have turned over the decades into art in the form of music and film, on canvas, and elsewhere.  It's in my blood and in my very being.

So yes, I am a secular Jew.  The theology does not speak to me other than that I know that it is part of me, it has shaped me, it is engraved in me as it has been for millennia.  All of those who have died over those many centuries simply because they did not believe the way the majority did, are all part of me.  Even if we don't believe, we owe it to those who died to acknowledge and honor them, come what may.