Yesterday was my 64th birthday.  That's kind of hard to wrap my head around.  My mother was younger than I am now when I got married, and I had just turned 31.  I was born on her birthday, so I never had my own birthday until she died in 2012, and by the time my birthday in 2013 rolled around, Mr. Brilliant was already navigating bladder cancer so it got lost in the shuffle again.

So I've never really cared about my birthday. I only remember two of them from my childhood.  One was the Infamous Buttercream Fracas of 1967, which ended with my sister and I both crying and our mother raging at both of us and which has me fifty-two years later still craving buttercream frosting on my birthday cakes.  The other was the surprise party that friends threw for my fourteenth birthday -- one of the rare times in my childhood when I felt I actually had friends.

Last year on my birthday I went with some new Mets fan friends here in North Carolina to watch the Kingsport,Mets play the Burlington Royals at the Burlington Athletic Park.  This is rookie league ball, and it's like a trip back to 1947, except that the beer stand has five different craft beers. If you've seen the movie Bull Durham, you got a taste of how hokey minor league baseball can be.  The Bulls were a "high A-league" team back then, not the AAA team they are now with a fancy ballpark in a booming small city.  The Burlington Athletic Park is more like the old Bulls park, only even hokier because this is baseball played by eighteen-year-olds.  Nine bucks will get you a field-level chair seat right behind home plate and ten bucks will get you a hot dog, a bag of chips, a box of Cracker Jacks, a candy bar, and a Coke.  There are on-field games for the kiddies between innings a mascot named Bingo that is only slightly less terrifying to the children than Mr. Met, and the announcers advertise local businesses and birthdays, so I had the mortifying experience of having my birthday announced, accompanied by my compatriots standing up and pointing at my head so everyone know I was the one with the birthday. 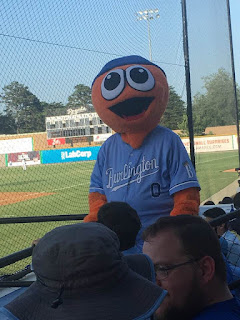 I insisted on avoiding this fate this year, so instead the annual trip to watch this mighty rookie league matchup took place the night before my birthday, which of course meant that Kingsport lost the game 7-2, looking very much like their New York namesakes, via a combination of lousy pitching, bumbled infield play and two-out singles that result in nothing, But there were fireworks after the game, and as everyone knows, fireworks are so cool that they mitigated the pain of watching everyone around you rooting for the home team.

This year I decided that what I wanted to do was further break in the Weber Spirit grill I bought in the summer of 2013 in a stupid and foolish gesture of hope that cooking meat over fire would give Mr. B. the will to beat cancer and survive.  It never got used at the old place, and I was going to leave it for the new owners of my house, but the movers loaded it onto the truck, and so it made its way here, where it sat, covered for 3-1/2 years until my handyman insisted that a brand new, never-used Weber grill was a crime against nature, and headed for the Ace Hardware store, returning with a full propane tank.  He cleaned off the leaves and cobwebs, hooked it up, and I was ready to go.  Its maiden voyage was on Memorial Day, so the plates are no longer gleaming and there is sufficient old carbon on the grates to impart that faint flavor of old grease that makes grilled meat taste so good.  So I decided on a small get-together featuring a Jamaican dinner of jerk chicken, rice and peas, and steamed cabbage, along with macaroni salad and coleslaw from Aldi, of all places, where four bucks will get you two pounds of EACH one, both of which taste like they came from a good deli in New Jersey.

Some people like to go out for a fancy dinner on their birthday.  I'm not one of them.  To me, particularly in this area, a fancy restaurant is some cavernous place full of hard surfaces, lousy acoustics, where a snooty college-age hipster waiter in a man bun treats me like a fat girl or worse, refers to me as "sir"; a place where mayonnaise mixed with some spice or another becomes aioli, a side of five asparagus with a lemon squeezed over them and a shaving of parmagiano on top is nine bucks, and thirty bucks gets you a duck leg cooked in its own fat sitting atop a glurp of mixed grains and roasted beets with a spoon-schmear of some other kind of aioli.  Or something.  Anyway, this is not my kind of dining, because it makes me feel too much like I've stepped into Downton Abbey and I am Tom Branson  having dinner with the Crawleys for the first time.  No, I am happier feeding people myself than doing this, and so that is what I did.  And it was.

Sharing a birthday with my mother was always a drag when I was a child, and when I became older and it was about trying to find a gift that would make her happy for five minutes. .  But I'm proud and happy to share it with a celebration of the poet laureate of world cuisine on the first #BourdainDay.

In the early days of this new blog, I wrote about Emily Hayward, a cancer vlogger  I'd been following who had just passed away on June 26, 2018.  YouTube is full of vloggers, a very few of whom, like Emily and like Jeff Eisner from Pressure Luck Cooking, have a unique ability to interact with the camera that appears to break down the wall between the virtual and real worlds.  To this day, my post about Emily has received more page views and generated more comments than anything else I've posted here, even my post about Anthony Bourdain after he deprived us of his wisdom forever last year.

I found myself thinking about Emily the last few days, which is something I do fairly frequently when that little voice inside me says "But I don't WANT to go to the gym."  I tell myself that if this young woman could get herself to the gym with terminal metastatic melanoma, I can damn well get MY fat ass there.

Today is the first anniversary of Emily's passing.  There is a battery-operated candle burning on my dining room table all day today.  She continues to be my spirit animal and role model for positivity,  for embracing life, and yes, for getting my fat ass to the gym.

"I want my channel to be about learning about how to live your life, learning about how to cope with terminal illness, learning about who you should surround yourself with, what you should do when you're dying of terminal cancer...just generally how you should live your life when you've got an illness.  Those you who HAVE got an illness, you suffer from something that is in your way of living your life, I want to help you deal with that.  If you've suffered from a loss -- someone who died of cancer whos close to you, it might help you come to terms with what's happened.  Not get over it, but just help you deal with situations that are tough in life in general." -- Emily Hayward, April 3, 2018