I didn't know her.

As ever less of our lives become private, and as companies like Google and Facebook seem to know more about us every day, I've noticed that the "Recommended For You" section of my YouTube page is showing a lot of things to which I never subscribed.  Back when Mr. Brilliant was sick, I did a lot searching for information about cancer.  And because of the work I did until recently, I was always looking for various published papers about disease assessment for various types of cancers, since there are differences between the way, say, solid tumors are measured vs. hematological cancers.

But Google, who now owns YouTube, decided that I would be interested in looking at videos by what is known as "cancer vloggers."  These are people with cancer who document their journeys on video, from diagnosis through treatment, and whatever comes beyond. So one day I clicked on a video by a young woman in the UK named Emily Hayward, who had been battling metastatic melanoma for seven years, since she was seventeen years old.

There were over 250 of her videos.

I haven't watched all of them.  I know what a time suck YouTube is.  But something about this young woman's ferocity grabbed my attention, and kept it there.

Emily Hayward was a fitness instructor and cancer warrior.  Diagnosed with melanoma in 2011, lymph node metastasis in 2013, and distant metastases in her liver, lung and brain in 2015, she spent nearly a third of her life battling one of the most dreaded cancers.  It does not appear that she was a sun worshipper; she described herself in one of her videos as "always moley" -- but one of those moles went bad, and today claimed her life at the damnably unfair age of 24.

She was also a lesbian, whose wife, Aisha Hasan, knew she had melanoma when they first got together.  They were married two months ago, both fully aware that their married life would be short.  I think that for me, as compelling as seeing Emily deal with her journey with a toughness and determination that I'm not sure I would have, it was also Aisha, whose wisdom about life and death, and whose stalwart good cheer, loving attitude and level-headedness in the face of what she clearly knew was going to be a shortened life with her soulmate, who grabbed my heart.  I wish that I could have been the kind of caregiver she was.  I wish I could have been like her.  It is one of my greatest regrets that I wasn't.

In the last video before Emily's death, Aisha says before they head out for the latest scan results, "You're going to walk in there with the same amount of stuff in your body as when you walk out. Even if they say you've got 26 tumors, you have those 26 tumors in you right now, and yet you've been to the gym....so it doesn't really matter.  You're still in control of it, I'm still in control of it.  They're just helping by telling us the facts."  Who among us is that wise? Who among us even has the presence of mind at such a time to even be able to think that way?

Five days before her death, Emily was at her beloved gym.  She was able to even write a farewell message on her Instagram page, right down to her trademark opening, "What's going on guys?":

What’s going on guys? After 8 long years of kicking cancer in the ass my body got tired, I achieved everything I wanted to and more. With all my loved ones around me I have now peacefully left you all. Thank you all for your love and support, but most of all thank you for always following my journey and believing in me. Love you all, peace Em

We talk about people "losing their battle with cancer."  It's a terrible phrase; it makes it sound as if they just didn't TRY hard enough.  The way you win the battle with cancer is not by simply surviving to see another day, or another year, or another fifteen years.  It's by living the life we've got with the people we love, going out on our own terms, and living on in the hearts of those we love, and sometimes, even those we don't even know but who we have touched somehow.  It appears that Emily Hayward was able to do just that.

Not all cancer vloggers are young, but most of them are.  Some of it is the tendency that young people (and even the not-so-young) have to share everything about their lives.  But for these young people with these horrifying prognoses, there's more to it than just conventional oversharing that young people seem to do these days.  These are people who are too young to have found their ultimate place in the world yet.  They haven't had even the option to have children.  Some, like Sophia Gall, who died earlier this year, never even get to finish high school.  But what they do have is a furious desire to leave their mark; to make their lives meaningful, to let the world know that they were here...and to be remembered.  If their time here is going to be short, they want to make it count, and their message to all of us is to treasure every day we have, because we never know what tomorrow will bring. 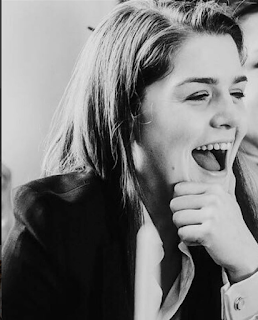 at June 26, 2018
Email ThisBlogThis!Share to TwitterShare to FacebookShare to Pinterest