Every election is the most important of our lifetime, but this one really is - personal thoughts on November 2020

I used to love fall.

By September or early October, I'd have had enough of summer and the cool weather made me come alive. There's something about the angle of the sun in the fall, the way it hits the changing leaves. There's a smell to fall too; it's the smell of fire pits and cinnamon and now the ubiquitous "pumpkin spice." It's cocoa and a good book and a fuzzy throw and the cats hunkered down all yin/yang on something soft or burrowed under the comforter. 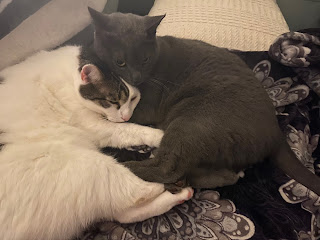 2013 changed all that.  Now I navigate the period from September 22 - October 5 with a kind of vague dread, reliving Mr. B's last days in the ICU year after  year after year.  This was the seventh anniversary (yes, really) and perhaps because of a song that's been played for a decade and a half but has special resonance for me forever, seven years seems particularly resonant.

After seven years, and the knowledge of how high a recurrence rate bladder cancer has, and about what real life is for many people with moyamoya is despite surgeries, I have come to where I can think "If Mr. B. were alive today, he wouldn't be alive today."  There's a comfort in that. He was not a man who was going to be able to cope with recurrent metastatic bladder cancer, or with not being able to drive for X number of years due to history of seizures, or with having occasional TIAs. He was nowhere near ready to throw in the towel on working, but until recently not being able to drive would have been a career killer for him. There was never going to be a happy ending there; at best there might have been a delayed one.

Autumn in North Carolina is different.  It stays warmer longer. We seem to have drown-or-drought. There are always trees that stay green all winter.  The skies are bluer.  And as November progresses, the overall pall of grey that seems to hang over New Jersey in that month is absent, and that helps leaven the memories with reminders that life continues.

This year is different, though. This year has had a mind-numbing sameness to it. I've been in semi-isolation since mid-March, due to the coronavirus pandemic, which the man up for re-election today has made sure may never go away in my lifetime. After building a life here in my chosen home in an attempt to not relive my mother's life, here I am, reliving my mother's life -- alone; my social contacts largely limited to Zoom calls, telephone, 15-minute driveway chats, and the occasional outdoor lunch. But it gets dark early now, and colder, and soon I will be hunkered down with the aforementioned fuzzy throw, the cats, and more streaming content than I can consume in a lifetime.

And today is Election Day, 2020. Four years ago, I was the only person I knew who thought Donald Trump would win, as impossible as that seemed.  Why did I think that?  Five words:  IT SHOULDN'T BE THIS CLOSE.

If you hadn't spent the 1980s in the New York metropolitan area, you probably thought that Donald Trump was the successful businessman of "The Apprentice."  Most Americans didn't know what he was. The media did, but they also knew he was good for delivering audience eyeballs to advertisers.  It should never have been close enough for the Comey letter to make a difference, or Russian propaganda to make a difference. But it was. And it did.

And it is too close for comfort today.

We always say that this is the election of our lifetime, but this year it is.  George W. Bush mused about things being easier if he were a dictator, and yes, people like me feared he might try it. But while we didn't realize it at the time, GWB had one thing that Donald Trump does not have:  a basic respect for American institutions. Donald Trump doesn't, as we have seen over the last four years. Today there is absolutely no excuse for not knowing what Donald Trump is.  And still -- nearly half of Americans support him.  I used to say that there was a hard-core 31-32% that would never turn on the GOP and George W. Bush. This was the core of white evangelicals, and die-hard war hawks who would rather be drawn and quartered than vote for a Democrat. But now it's the "Trump Core", or "Trump Cult", if you will -- and it is 40-44%.

So no, I am not optimistic about today.  This is the death knell of white male patriarchy.  It is armed, and it is not going down without a fight.  Joe Biden may squeak this out today.  And who knows, John Roberts may decide that for all that he doesn't seem to care much about voting rights, he cares very much about his legacy.  And Neal Gorsuch, who may only SEEM less doctrinaire because of the Trumpesque grievance philosophy of Brett Kavanaugh and the retrograde religious fervor of Amy C. Barrett, may also look at the big picture.  But we are in for a very ugly few months, perhaps years, no matter what happens today.

And I am by no means confident that there won't be a smoking ruin where the United States of America used to be when it's over.