Forward into the Past

I first met Pen-Elayne in 1977 at a Jewish singles event in Carteret, New Jersey that was one of the worst social events I ever attended.  It was at the home of a thirtysomething guy who lived with his elderly mother.  All I remember is a bunch of people sitting glumly on couches, except this funny, chatty woman across from me.  It was not the match that the group had in mind, but I think we both recognized kindred weirdo spirits, and we became friends, regularly revisiting that evening and snarking about it far longer than it deserved in our life stories.

I'm not sure how we lost touch, but we did for a couple of years, until I ran into her at yet ANOTHER Jewish singles event, this one populated with FAR more interesting people, and we reconnected once again.

I was shy and introverted, and Elayne was a force of nature.  An imposing figure, she was completely  socially unaware, chatty, ferociously verbal, and with next to no boundaries at all, took over every room she was in.  No one could resist the Force that was strong in that one, even if they tried. This time, our friendship outlasted the end of the singles group, which was discontinued by the YM-YWHA that sponsored it because we weren't producing any Jewish marriages and resulting babies, but were more interested in just having fun.

Through Elayne, I learned about fan culture.  Today, fan culture is so mainstream that movies based on comic books are propping up the movie industry, huge conventions of fans of various types exist in every city in the country, guys like Kevin Smith can become successful filmmakers, and movies based on the Lord of the Rings trilogy (a.k.a. the geek cred holy books) win Oscars, but in the early 1980s, when we reconnected the first time, it was something I knew nothing about.

I was never into comic books OR science fiction, which are still the core of fan culture.  I got tired of comic book movies after the first "Iron Man," though Mr. Brilliant went to every one of them until he became ill. But Mr. B will come into this story later.

I knew that fandom was about Star Wars and comic books and it seemed to me, as a Very Serious twentysomething who at the time thought I just wanted to work in a creative industry and live like a Cosmopolitan Girl, being taken to nice places by elegant men in three-piece suits, culminating in an Appropriate Marriage, to be kind of silly. I never did become part of the pop culture part of fan culture, but I sort of flitted around the edges of it with Elayne and our friend Anni.

Most fans are smart weirdos who have at least at some point felt that we have been put here by mistake; that we belonged on some other planet where everyone has a finely-honed sense or irony, finds humor where others don't, and can talk endlessly about just about anything. I never adopted fandom through Elayne, but at long last I recognized who My People were. My mother wanted My People to be a Jewish doctor, lawyer, dentist or CPA (in order of desirability) who would marry me and support me in the style to which SHE wanted to be accustomed. I was so symbiotically bonded to my mother in those days that I had convinced myself that was what I wanted too -- until Elayne's world taught me that there was one I fit into much better.  But our weirdo world didn't just go one way.  Elayne brought fan culture to the table, and I brought my own weirdo pop cultural touchstones, like Allan Sherman, Stan Freberg and Tom Lehrer records, and most importantly, the Firesign Theater. In the late 1970s, we were, in our own way, the Jay and Silent Bob of Union County, New Jersey.

Inevitably, the rabidity of fan culture would enter the extant world of fanzines. Triggered by the 800-pound gorilla that was Star Wars, fanzines exploded, popping up everywhere. By 1988, fan culture had spawned the Church of the Subgenius (arguably the Mother Of All Weird Pop Cultural Touchstones), and its founder, Ivan Stang, had published High Weirdness By Mail, a "directory of the fringe -- mad prophets, crackpots, kooks and true visionaries."  In other words -- MY kind of people. There are still zines around today, with an entire web site devoted to the ones around today; a stubbornly low-tech relic in a high tech world.

In 1980,  Elayne began publishing a zine called Inside Joke that started out in the obscure area of Uncle Floyd fandom, which gradually evolved into one of "comedy and creativity."

There were no personal computers in those days, and certainly no desktop publishing software. Publishing like this meant paste-ups -- cutting out typed text, arranging it, and attaching it to other pieces of paper with glue sticks.  Headline fonts meant buying rub-off letters in craft stores , creating the headlines on paper and pasting them on the paper above the text.  Publishing a zine was a labor of love and time, and Elayne did it EVERY SINGLE MONTH for a decade.

By the fall of 1981, Elayne had convinced me that I should write for Inside Joke. I don't recall feeling an urge to write before then, though I'd always had an easy time writing papers for school.  But Elayne convinced me to write book reviews, which then turned into other articles, and presaged the kind of writing I would do years later, when in 1998 I would start doing online movie reviews, and in 2004, I would start that other place.

One day in late May of 1983, Elayne dragged me out of the house because it was time to run off the latest edition of Inside Joke.  I'd had a run of incredibly bad boyfriends and even worse dates, and after the previous night, in which a first date consisted of listening to a guy cry over his ex-wife and talk about his experiences with EST, I'd decided that finding a Special Someone was never going to happen for me. This knowledge had me barely able to get out of bed, but Elayne is the irresistible force that can move the immovable object, and I reluctantly agreed to go.

So Elayne, Anni and I sat in Elayne's car across the street from Siggy's Bar in Fort Lee, New Jersey on a Saturday, bitching about men and waiting for some guy named Steve, who worked for a market research firm and had access to high-speed collating copiers, to arrive by bus.  I pointed out a very handsome young guy, sauntering across the street in a yellow striped polo shirt and white cargo pants, a cigarette hanging out of his mouth, and said "See that guy?  That guy thinks he's God's gift to women." 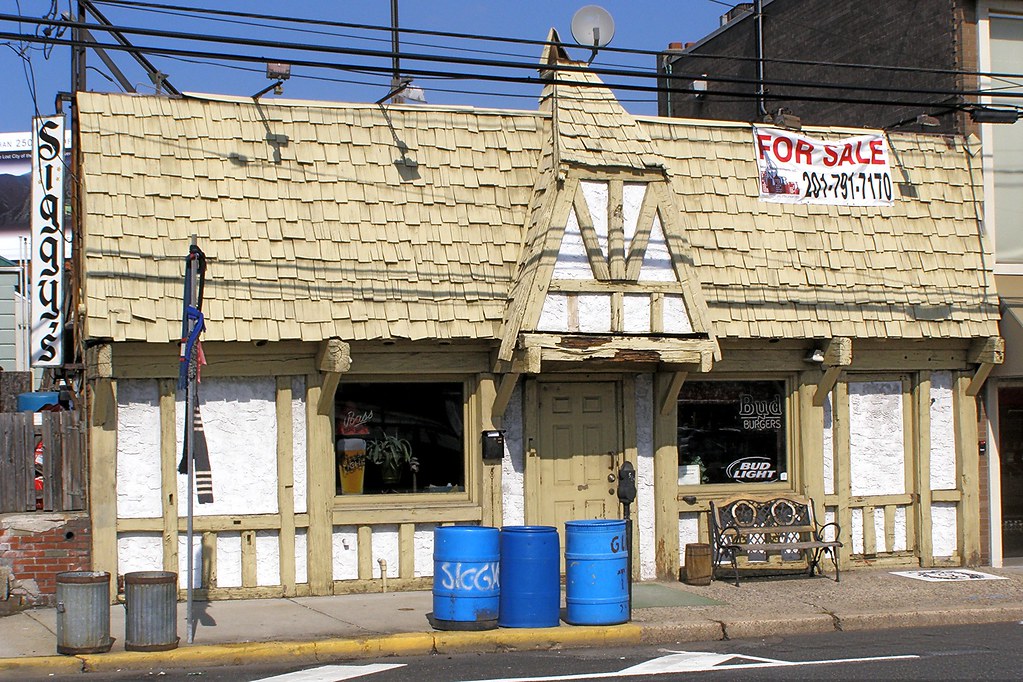 The bar formerly known as Siggy's


And then That Guy got into the car. 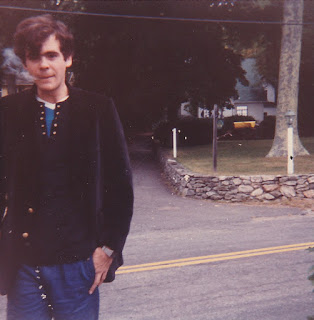 That Guy, fall 1983, smoking and looking very much like he did on that day in May.


I will never know if Elayne was doing a shidduch that day.  She doesn't have a photographic memory of that day the way I do.  But I vividly remember rattling off one weirdo pop cultural touchstone after another -- from the ones I mentioned above, to the surreal genius that was Ernie Kovacs, to the 1969 New York Mets season, to the WMCA Good Guys -- the DJs on the AM rock 'n' roll station that in the 1960s was the "cool" one to listen to.  If I'd had better self-esteem, I might have noticed that That Guy's eyes were lighting up with each weirdo pop culture reference we had in common. But I think it was that we both remembered Gary Stevens, the evening WMCA DJ, and his imaginary sidekick The Woolyburger, that sealed the deal.  You see, when I was a kid, we had a poodle that we'd named Woolyburger.  She was the best dog I ever knew.  But Gary Stevens went off the air in 1968 when Woolyburger the poodle was only three, and for the next eleven years, I had to explain to people what her name meant.  This became especially difficult in my early teens, when people tended to think it was about pubic hair.

But That Guy, a.k.a. Steve, a.k.a. Mr. Brilliant, knew who the Woolyburger was.  And the rest is history.

Gary Stevens with the Woolyburger in 1965
Elayne and I lost touch again after a while.  I'm not sure why.  I think that when Mr. B. and I got married, and we went from dead-end jobs to careers and we became homeowners, our pop culture weirdo status became less noticeable even to us. Elayne kept moving further out in Brooklyn and Anni moved to Reading, PA, and I suppose it was inevitable.  Elayne followed Inside Joke with Four Alarm Firesignal (a.k.a. Falafal), a  new fanzine devoted to the Firesign Theatre alas now consigned to the dustbin of history.  Later on, we both started blogs, and then there was Facebook, and well, we became friends again, hopefully permanently this time, though we live even more miles apart now. Elayne is one of the few people in the world who even know that Mr. B. ever even existed, never mind having this shared memory and such a huge role in my life. But those days in the 1980s were good times.  They were zany and creative and ironic and fun and Elayne is a true American original.
We may not be able to return, but we can look behind from where we came, and I'm thrilled to let you all know that you can too, because Inside Joke -- all ten glorious years of it -- are now available in PDF format for all time.  IJ is a time capsule, but more than that, it's a reminder of when long-form writing was cool, It wasn't about clicks or monetizing or being followed on Twitter.  It was just a bunch of weirdos screaming into the void, hoping other weirdos would read it and find kindred spirits.
See you in the funny papers. 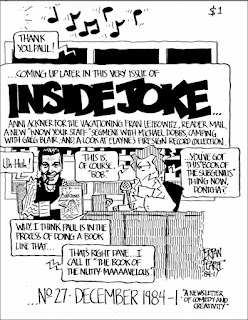