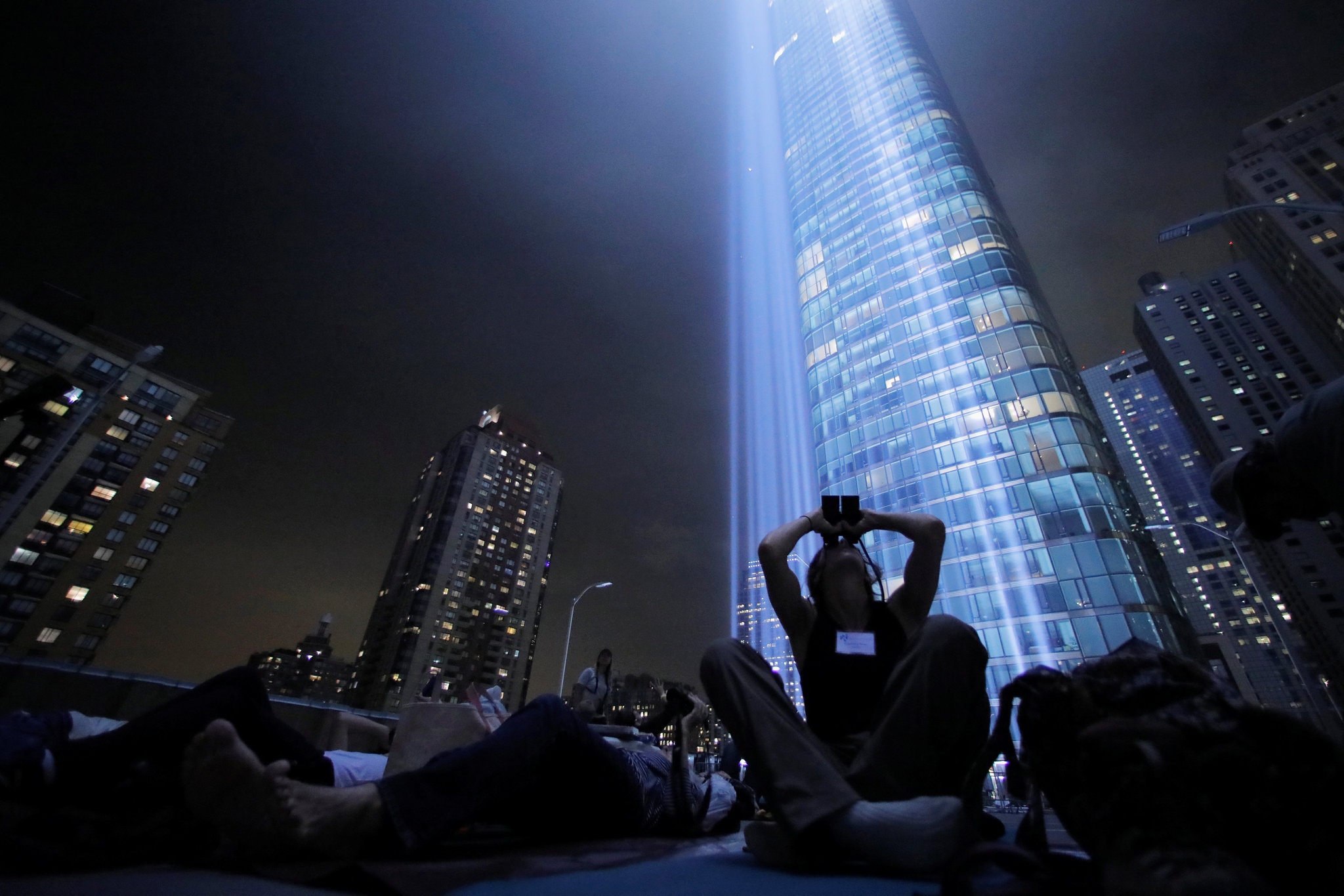 I know that this is still an unpopular view, though some (including Your Humble Blogger)  have expressed it before, even as early as 2006. but even if for this reason alone (and there are others), I think there has to come a time when we stop this annual orgy of living -- dare I say enjoying --  9/11 over and over and over and over again. In an age where there have been 2311 people killed or injured in mass shootings since the 9/11 attacks and we have done nothing, and after eighteen years of pointless war in Afghanistan and not much less than that in an even more pointless war in Iraq, I think that we have let that day damage the national psyche enough.

I'm sure that there are families who would like to see the observances continue forever. I don't fault them for that. But I also have to wonder what it's like for them, and for those who have managed to patch their lives together without their loved ones, to have to watch that horrific footage on the 11th of September year after year after year after year. I would probably have long since decided to take an overseas vacation during that week by this point.

I keep remembering the "Jersey Girls," the 9/11 widows from New Jersey who demanded an investigation. We don't hear from them anymore. The most recent article about them that I could find was from 2012. I'd like to believe that they have learned how to live without 9/11 being the sum total of the definition of their lives.  I can't possibly know what it's like to kiss your husband goodbye in the morning and never see him again, though I do know a few people who DO know what it's like. Do their lives matter less?  Do the lives of people gunned down by white Christian American terrorists matter less?  No one outside their families reads THEIR names or shines beams of light for them. National figures don't go to Newtown, Connecticut every December 14 for a reading of the names of the children killed that day. Nor will there be televised vigils in perpetuity for those killed at a concert in Las Vegas, or at the Pulse nightclub in Orlando, or at the movie theater in Aurora or the Tree of Life Synagogue in Pittsburgh, or any of the other mass shootings that have punctuated the years since 9/11. For that matter, there is no nationally-televised coverage of any observance of the Oklahoma City bombing victims either, and we all remember the dead child being carried by a firefighter out of the wreckage from that one. Of course that one was also perpetrated by a white Christian male, so perhaps it "doesn't count." Perhaps only attacks by darker-skinned people count in the American psyche.

In 2001, the attacks on the World Trade Center and the Pentagon were the most horrific thing that had happened in this country in our lifetime. Eighteen years, over 4000 dead Americans and hundreds of thousands of civilians in Iraq, over 2300 dead Americans and over 30,000 war-related Afghani civilian casualties in Afghanistan, and over 2300 dead on our soil by guns. If horror is to be measured only by American body counts, then given that we have been willing to tolerate mass shootings rather than do something about the proliferation of guns, isn't it time we found a place for 9/11 that doesn't involve reopening the wounds of these families year after year after year? Are we so sick as a nation that we really enjoy watching those planes and those buildings collapse that much? Or is it just that as Anthony Burgess wrote in A Clockwork Orange, "the colors of the real world only seem real when viddyed on a screen"?

There is a new tower down in lower Manhattan now, looking more like the financial district giving the rest of the world the finger than anything else. There is a museum and reflecting pools with the names carved into the stone edges much like the Vietnam memorial wall in Washington DC. No one reads the names of the dead Americans in Vietnam. But people go, and make rubbings of the names just as they do at the World Trade Center now. Both are hallowed places that should be treated with respect. But there also people taking selfies and vendors hawking souvenirs. It is a tourist attraction.

Grief is inevitably personal. There are differences from one person to the next, but all of us who have grieved the loss of a spouse, brother, mother, father, sibling, or close friend have certain threads in common. But still – it is a personal journey. We observe their birthdays. We observe the anniversary of the day they left us. (Irrelevant side note:  Mr. Brilliant's sixth (!!!) "sadiversary" is coming up on October 5.)

9/11 is a wound to the national psyche that in our complicated grief about it, we do not stop to think about the direct line that leads from 9/11 to Donald Trump. The Islamophobia we still see in small towns dates from those early days, when people in small towns were terrified that terrorists would fly planes into their local Wal-Mart. Back then, Donald Trump was still in New York, insisting he saw thousands of Muslims cheering (another Trump lie). Today in these towns they still elect legislators who promise to ban "sharia law" even though no one is trying to implement it. As recently as June this year, a spokesman for child predator and GOP Senatorial candidate Roy Moore said that Muslims can't serve because "you need a Bible" (you don't). The lack of transparency of the Bush Administration and the lies about Iraq created the skepticism about government that led to the embrace of an "outsider." The election (twice) of Barack Obama now feels more now like the last dying breath of sanity in this country than any kind of progress.

Of course we shouldn't forget. How COULD we forget? And yet we did forget.  We forgot about the people who went to the site in the days and months following the attacks to dig out, to try to find survivors at the ultimate expense of their own health and even lives, while they were lied to by an administration that has never really been truthful about what happened.  I remember Christine Todd Whitman, now lauded among TV commentators as a "thoughtful, sane Republican," insisting that the air was clean.  Tell that to the guys sitting behind Jon Stewart, who had to SHAME Congress into passing 9/11 responders funding and SHAME Mitch McConnell to allow the Senate to pass it.

Yes, risk is part of the first responders' job.  But they were entitled to be told the truth, and they were not.  But it shows how highly selective we are about exactly WHICH 9/11 victims whose memory we want to continue to flog for political reasons in perpetuity.

There comes a time to let the dead be at peace instead of metaphorically digging them up year after year after year. I have long believed, and have had multiple experiences to back it up, that the dead hang around as long as we need them. It is our duty to them to not need them too long, to not demand that they be stuck between this world and whatever comes next. The 9/11 families should decide when to let their loved ones move on to whatever comes next, not us. We owe it to them to give them back to their families. They have been used as political footballs and symbols rather than people for far too long. The best tribute WE can give them is not to treat their deaths like a snuff film to be watched every year, it is to remember the destruction that hatred, religious zealotry, and lust for power can do, to seek a more gentle world, and in doing so, quietly honor the lives they lived instead of grotesquely celebrating every year the way they died.

at September 11, 2019
Email ThisBlogThis!Share to TwitterShare to FacebookShare to Pinterest
Labels: 9/11