The only measure of "electability" is actually getting elected

Alex Pareene, at The New Republic:

“Electability” is a crock of shit. It is defined, like political “moderation,” only in terms of opposition to things people want, but are told they can’t have, ranging from antiwar politics to left-wing economic populism to even the “cultural liberalism” that is seemingly the cornerstone of the modern Democratic Party. (Back in 2004, supporting civil unions, not even marriage, for same-sex couples was a threat to a Democrat’s perceived “electability.”) While the impulse to vote according to how you think a candidate would appeal to people who don’t share your priorities might make sense in theory, practice has revealed time and time again that no one involved in electoral politics—from the pundits down to the caucus-goers—has a clue who or what Americans will actually vote for. That was supposed to be, as the political scientist Masket says, the main lesson of Trump’s election.

But Democratic voters did not teach themselves to prioritize electability over their own actual concerns. They were trained to, over many years, by party figures who over-interpreted the loss of George McGovern, or who wanted to use the fear of McGovern to maintain their power over the Democratic candidate pipeline and nomination process. “Electability” is a way to get voters to carry out a contrary agenda—not their own—while convincing them they’re being “responsible.”

And now Democratic candidates and their most loyal voters are stuck in an absurd feedback loop. The politicians campaign and govern as if they themselves don’t believe a majority of voters prefer their agenda, signaling to their most loyal voters that they must vote not for what they want, but for what they imagine their more-conservative neighbors might want. But when voters in 2016 did exactly that, and nominated the candidate they were repeatedly told was most qualified to defeat Trump in the general election, they chose a person who went on to lose to him.


I'm kind of surprised to see this at "The New Republic", but then again, Alex Pareene cut his political reporting teeth at Salon back when Salon was an actual force in progressive journalism rather than a compendium of "promoted content."

Every time I see the word "electable" used, I know it's code for some candidate who isn't going to rock the boat, but is palatable to the moneyed pundit class whose jobs can't be outsourced and who rarely set foot outside the Washington cocktail weenie circuit.  Most of them are concern trolls, the most prominent of which is David Brooks, who for my money, will never live down The Great "salad bar at Applebee's" Fracas of 2008 -- the archetype of cluelessness about real lives that pundits cover up with a thin veneer of empathy.

The concern troll class doesn't want anyone rocking the boat -- at least if that boat means they might have to pay more taxes, or be proven wrong in their conventional wisdom.  Most of them own a couple of houses, send their kids to tony private schools, and generally live far better than the working-to-middle class they purport to represent. So whenever I see one of these people on the teevee talking about electability, or how the Democrats have to be careful not to "go too far" in holding the Trump administration to account by,  you know, actually DOING THEIR JOBS, I wonder why, after seeing an "electable" candidate lose to a carnival barker in 2016, anyone at all thinks these people should be taken seriously ever again.

It all goes back to the Grand Unifying Theory of Clintonian Centrism, in which every pundit still sucking air took the wrong lesson away from the success of Bill Clinton. These people seem to have forgotten that in 1992, everyone had forgotten Clinton's endless 1988 Democratic National Convention speech and embraced him as the most charismatic American politician since Bobby Kennedy met his end on a hotel floor in 1968. They hailed his "Sister Souljah" moment, when he chastised a black female rapper.  But think about where progressives were in 1992.  As Pareene notes, the Democratic Party was still traumatized by the 1972 Watergate-fueled loss of George McGovern to Richard Nixon; and yet the one term of Jimmy Carter (who in retirement has turned out to be more of a progressive and Christian than anyone currently in power in the Democratic Party hackocracy but at the time was regarded as hopelessly inept) didn't show them that centrism wasn't a magic bullet.

And so began the kowtowing to the punditocracy that continues to this day; a deep-seated terror within the breast of the national Democratic Party that Chris Matthews or Joe Scarborough or Chuck Todd or Michael Smerconish or David Brooks or the Pamela Des Barres of the Reagan administration Peggy Noonan,  or some other self-styled "expert" will say mean things about them.  Al Gore had to run away from the Clinton record, lest he be tarred with the Blowjob Brush.  Howard Dean had to be branded as crazy so that an "electable" war hero like John Kerry, who did NOTHING when he was slandered, could be the nominee.   And when irregularities were found in Democratic strongholds in Ohio in 2004, John Kerry didn't rock the boat and risk the pundits calling him a sore loser.  No, he tucked his tail between his legs, took his $14 million in leftover campaign cash and went home without a peep, leaving Barbara Boxer and Stephanie Tubbs-Jones on the floor of the Senate without backup, trying desperately to stop the certification of the Ohio vote.

And then in strode the skinny black freshman Senator with the Oh-He-Can't-Get-Elected-With-That-Middle-Name, who promptly chose Joe Lieberman as his Senate mentor and voted with everyone in his party except Barbara Boxer to certify Ohio.

Yes, he was black and virtually unknown, and a great many people on the left ascribed to him a leftishness that he never really had.  The left blogosphere, then at its peak of influence, turned him in 2008 into what they wanted him to be.  Meanwhile, the only other candidate, John Edwards, who WAS running to the left by talking about income inequality, ran off the rails by being stupid enough to have an affair while his publicly-beloved wife was enduring a cancer recurrence.

When you look at the Obama record, it is a triumph of pundit-endorsed incrementalism and war hawkery.  Guantanamo was NOT closed.  The wars in Iraq and Afghanistan went on with no concrete mission and no exit strategy.  The banks were bailed out.  The auto industry was bailed out.  Obamacare had no public option.  Merrick Garland was allowed to wither on the vine instead of being seated in a recess appointment in the last year of the Obama Administration.  In fact, the Obama years were a pundit wet dream, for all that they weren't happy with him either.  And it all could have been predicted when he refused to stand up for black voters in Ohio and buck his party's hackocracy.  And still, the press was brutal on him for eight years.  So why the Democrats still try to appease this giant maw of idiocy is a head-scratcher.

And that brings us to 2016.  Now I'm not a Bernie die-hard insisting that Bernie could have defeated Donald Trump, because I'm not sure in 2016 that ANY Democrat could have.  Rage makes people irrational, after all.  But at a time when the system is broken, and far too many people are angry at the system -- angry enough that Trump was a viable candidate at all, never mind picking off establishment figures one by one, only the Democratic hackocracy and the pundit class could decide that a woman who had been a lightning rod for white male rage for 25 years, and who had a bad enough sense of optics to think that having a private email server wouldn't be a problem, should be granted the nomination without any kind of primary challenge. And then once she had the nomination, they proceeded to eviscerate her just the way they did 25 years earlier.  Why did this surprise anyone?

So here we are, with a veritable "A Night At The Opera" stateroom of Democratic candidates for the presidency.  They're a pretty impressive bunch, most of them.  Some of them even have some concrete policies for actually making people's lives better.  But every day on the teevee, the same pundit class that has been wrong for the last 25 years is out there preaching caution.  Don't rock the boat.  Don't offer anything to make people's lives better. Don't have any ideas.  Don't piss off Wall Street.  And above all, don't pay ANY attention to, say, the Senate or to keeping the House.  Because like fans of the New York Yankees, the pundits ONLY care about the big series at the end of the season. 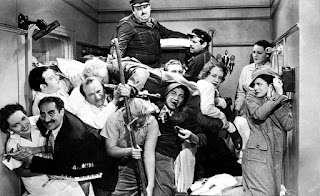 Photographic representation of the 2020 presidential field.  Which one is "electable"?

at May 03, 2019
Email ThisBlogThis!Share to TwitterShare to FacebookShare to Pinterest